The turn of the decade brought more changes to the on air line-up.  1960 saw the addition of Dave Roddy and Herb Steadman to the line-up.  Tommy Charles departs in 1961, for a brief stint in Houston, Texas.  Duke Rumore departs in late 1962 for WYDE, where he would be the mainstay there for the rest of his career.  Tommy Charles would return to Birmingham, and join Duke Rumore and Doug Layton at WYDE for a short period.  In 1963, Layton and Charles would buy into a local station, WAQY, and compete with WSGN throughout the 1960’s.

Herb Steadman took over as News Director in 1961, replacing Peggy Crosswhite.  Ben McKinnon went west as well in 1961, only to return 2 years later.  Bill Bolen was replaced as Program Director in 1963, but stayed on in the News Department.  With all the changes, people coming in and out, WSGN was still a middle of the pack station in Birmingham, competing with WYDE and WVOK for ratings.  Dave Roddy took over as Music Director, and greatly expanded the playlist.  However, something was still missing.  Ben McKinnon would find that missing piece in late 1963, and hire him as the next Program Director. 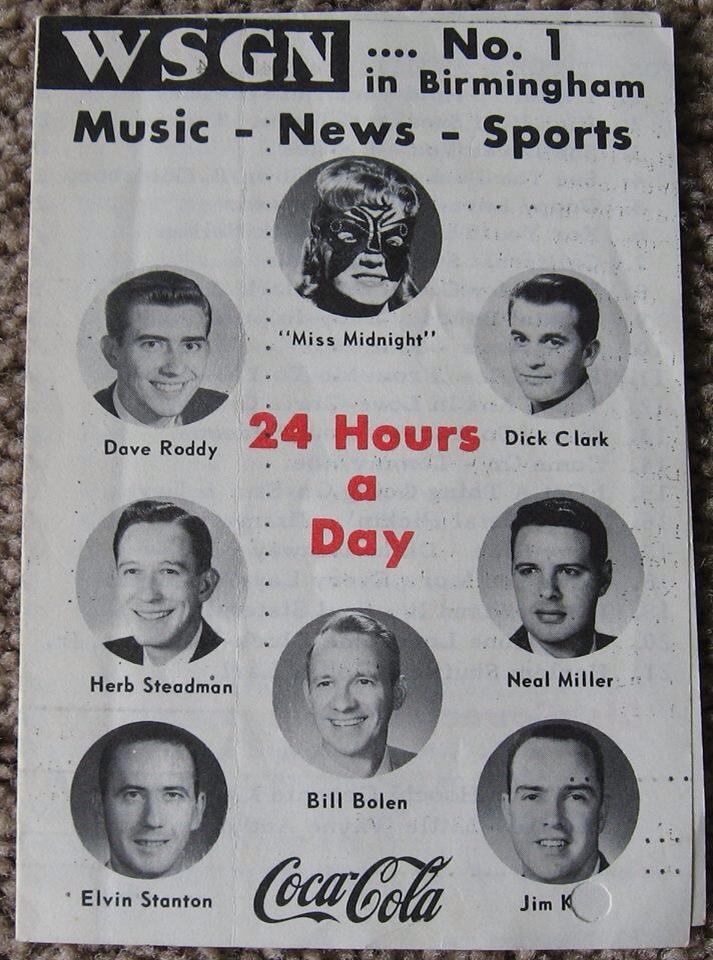 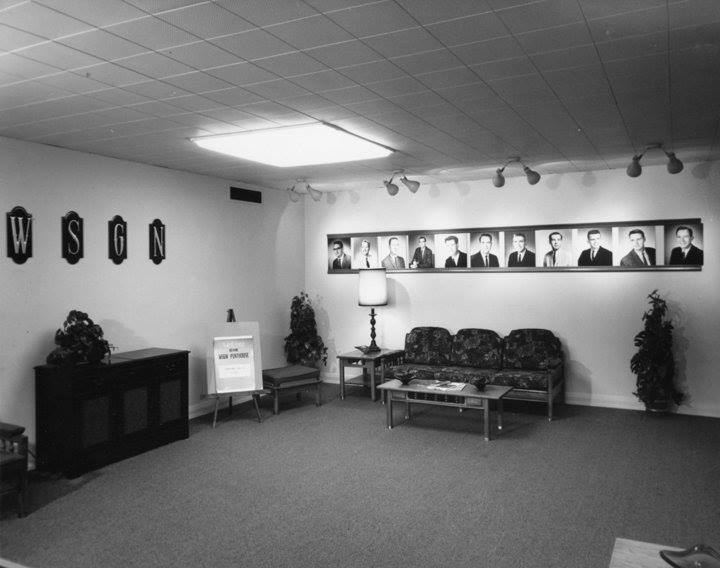 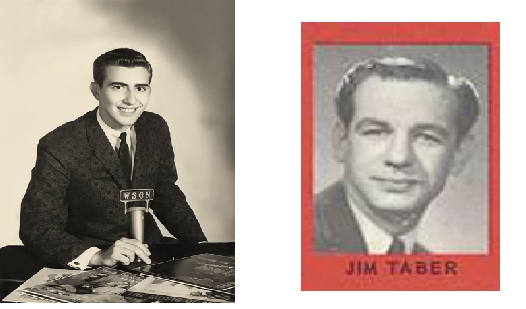 Jim Taber was working in Mobile at the time Ben McKinnon brought him in to be Program Director at WSGN.  Taber brought a new look and sound to Birmingham.  1964 would be a year of change for radio in Birmingham.

In 1964, WSGN moved their studios from the Southern Life Building to the penthouse of the City Federal Building, where the studios would reside for 8 years.  Jim Taber had the line-up of Herb Steadman,  Walt Williams, Jim Kell, Dave Roddy, Neal Miller, Russ Knight, Robby Reed and Glen Powers on WSGN in 1964.  Taber renamed the WSGN line-up The Good Guys.   Taber brought Elvin Stanton in as News Director in 1964 as well.  Miss Midnight decided that a daytime job was for her, and left the station.   Bill Bolen stayed on in the News Department until 1965, where he left for television.

Jim Taber brought with him concepts, ideas and promotions that were innovative, ingenious, and some outright crazy.   1964 saw the introduction of the Pick Hit Of The Week, and the Bomb of the Week.   Some of the early contests and promotions were School Spirit Contest, and “Simonizing Red Mountain.”

Jim Taber made the decision to start using PAMS jingles,  he started adding a distinct echo (reverb) to the signal, which gave it a more polished sound and Taber instituted the iconic smiley face to the surveys, tee shirts, and other material associated with WSGN.  Taber also had his circus horn, which was off limits to everyone.

By the beginning of 1965, Jim Kell departed for Huntsville,  taking a Program Director job in Huntsville. Bill Bolen and Neal Miller left for the lights of television,  Bolen at WBRC Channel 6, and Miller starting a little show called the Sgt. Jack Show.  Jim Taber brought in Steve Norris and Dick Kent to the Good Guys line-up.   Dick Kent would have a brief stint, leaving in 1967 for Nashville.   Steve “The Mop” Norris, on the other hand, would become one of the most popular morning men in Birmingham before his departure to St. Louis in 1973 .  Norris started doing traffic, and the 9 – midnight shift.  It was mid 1966 when Taber moved “The Mop” into the 6 – 9 a.m. slot, where he became a Birmingham fixture for the next 8 years.  Walt Williams took the 9 – noon slot,  Handsome Dick Kent was in the noon – 3 slot, Taber locked down the 3 – 6 p.m. slot,  Rockin’ Dave Roddy had a lock on the 6 – 9 p.m. slot, Happy Herb Steadman took over the 9 – midnight slot,  and Glen Powers took the overnight shift.   This line-up would rule the Birmingham airwaves for the better part of 1966 and 1967.

1966 saw a change in the News Department.  Dave Perry replaced Elvin Stanton as News Director, a position that Perry would hold for 8 years. 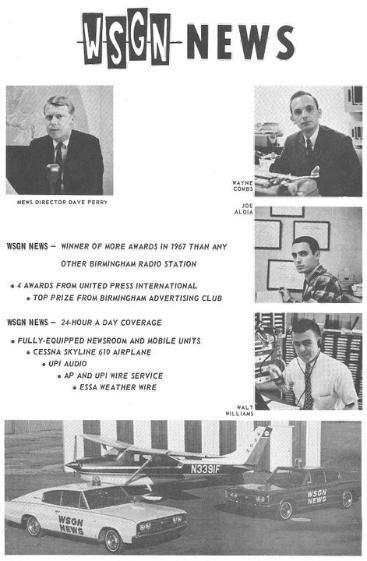 1967 would see a change in the on air line-up, with Dick Kent departing for Nashville.  Edward Dean came aboard in 1966, and by the end of 1967, Dean was in the 10 – midnight slot.  Taber launched a few promotions that were popular in the mid 1960’s.  The Matchbook Game was a hit, along with the Social Security number game, where winners would be eligible for the station to pay their federal income taxes, up to, of course, $610.  Shoney’s sponsored the parking spot promo, where the DJ would announce a parking spot number, for a free meal.  But 1967 saw the launch of a promotion which turned out to be one of the most popular and talked about promotions of the era, and is still talked about to this day: The WSGN Tennaballs.  First prize was a 1968 Cougar, with second prize being a set of tires.

In the mid late 1960’s, WSGN would pull up to 60 percent of the listening audience in Birmingham.

As with everything else in the city, and country, 1968 would bring change to WSGN. 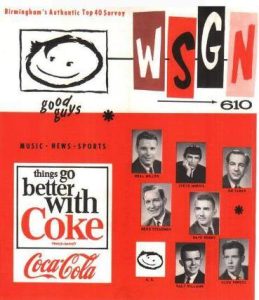 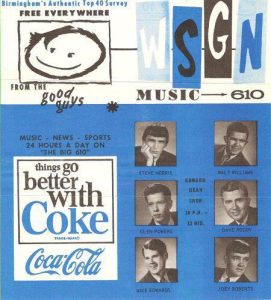 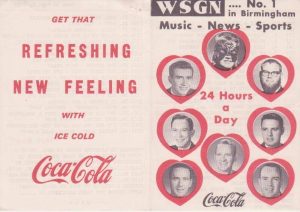 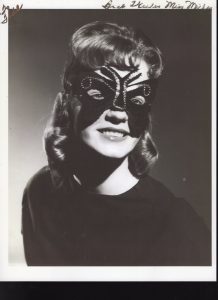