WSGN moved to the Dixie Carlton Hotel in February, 1941, and in March of the same year, WSGN upped its power to 1000 watts, and moved the transmitter tower to the Alabama State Fairgrounds.   In the 1940’s WSGN’s lineup went through some changes, as the pioneers of the station moved on to bigger opportunities, both within and outside radio.   The February 1946 line-up started off with Don McNeill and the Breakfast Club at 8 a.m., Monday thru Friday.  Following McNeill was Tom Beneman with Breakfast In Homewood at 10 a.m.   At 11 a.m., Cliff Arquette brought us Glamour Manor.   John Nelson followed the Manor with Bride and Groom at 11:30 a.m.

Vocal Frolic came on at 2 p.m., and at 2:45 p.m., a young Johnny Olsen brought us Ladies, Be Seated.  Jack Berch came on with The Jack Berch Show at 3 p.m., and In The Groove at 4 p.m.   Lil Abner came on at 7 p.m. each weeknight with the exception of Thursday night.

In 1948, Dick Hawley was brought in from New York, to broadcast the Barons baseball games.

As WSGN entered 1950, changes were on the horizon, in location, on air talent, and with those in charge.  These changes would be the cornerstone of what would be radio dominance for the next 30 years.

The 1950’s brought a location change to WSGN.  1954 saw the studios move from Dixie Carlton Hotel to the Southern Life Building.  The 1950’s saw the Sky Castle come to life, at Eli’s Drive In, and at 5 Points West.  Duke Rumore , Ward McIntyre, Neal Miller and Tommy Charles were mainstays at the Sky Castle. 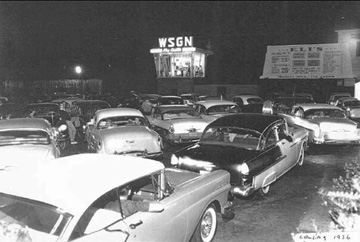 The turn of the decade saw a change in Program Directors, with WSGN having 5 different PD’s in the decade.  A News Director was established in 1953, with Gene Proctor serving as WSGN’s first News Director.  Henry Johnston, the longtime General Manager of WSGN, gave way to Bascom Hopson in 1953.  Johnston was GM for 16 years. Hopson was GM for one year, then a major change would take place, as The Godfather of Birmingham Radio would begin a legendary career in radio. 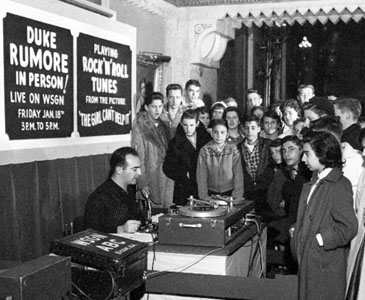 In 1955, Ben McKinnon, the “Godfather of Birmingham Radio”, became Vice President and General Manager of WSGN, and stayed VP and GM for the next 24 years.  In 1980, Ben became President of the company, and held that position for 2 years.  Ben oversaw the major changes that WSGN made throughout the 1950’s, 60’s and 70’s.

Ben McKinnon changed WSGN’s on air line-up and their format in 1955. McKinnon introduced a format change to a “music and news” format. With that change, the Swingin’ Southern Gentlemen was born.  The line-up, featured Duke Rumore as the “boss jock”.   Future Birmingham legends Bill Bolen, Ward McIntyre, Neal Miller joined WSGN the year before, and stayed on with the fomat change.

Future Birmingham legend Tommy Charles joined the line-up in 1956.  Ken Scott, and Horace Pumphrey rounded out the 7 Swingin’ Southern Gentlemen.  With this format swap, WSGN became the first top 40 radio station in Birmingham.  Competition came from WYDE (Sam Hale), and WVOK (Joe Rumore).  A couple of side notes, though Duke and Joe Rumore were brothers on competing stations, the two were never on in the same time slots.  Doug Layton, who would join the WSGN line-up in the 1970’s and 80’s, was not on WSGN in this time period.

With the format change, Bill Bolen became the morning disc jockey and also headlined the Saturday evening Rollin’ with Bolen show.  Bolen would be named Program Director in 1958, where he served as PD until 1963.   Horace Pumphrey served as both News and Program Director fron 1956-58, giving way to Bolen as PD, and to Peggy Crosswhite in 1959.  Bolen and Crosswhite would be in those positions as WSGN entered the 1960’s.

The 1960’s brought more changes to the on-air line-up, and to the Program and News Director positions.

Ben McKinnon brought in the one person that would change the face of Birmingham radio, changes that would put WSGN in the forefront throughout the 1960’s. 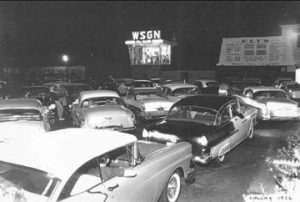